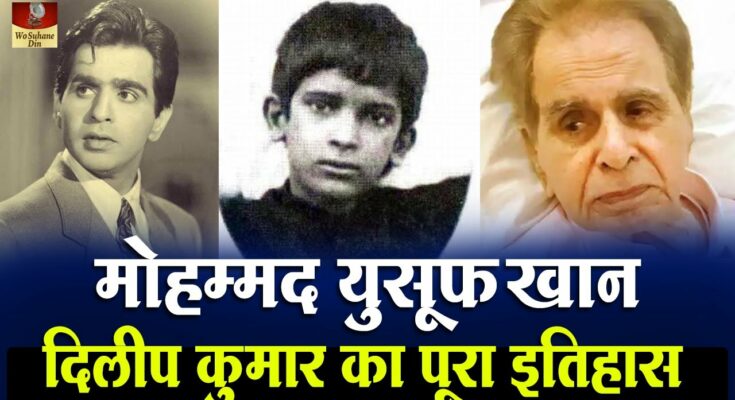 Mohammed Yusuf Khan (born 11 December 1922), known professionally as Dilip Kumar, is an Indian film actor and philanthropist, best known for his work in Hindi cinema. Referred as “The Tragedy King” and “The First Khan”, he has been credited for bringing the method acting technique to Indian cinema. Kumar holds the record for most wins for the Filmfare Award for Best Actor and was also the inaugural recipient of the award.

Dilip Kumar had a long relationship with actress Madhubala but never married her. He married actress Saira Banu in 1966. They currently live in the Bandra suburb of Mumbai in the state of Maharashtra in India. As of 2021, he is one of the last surviving stars from the Golden Age of Hindi cinema

Dilip Kumar was born Mohammad Yusuf Khan to Ayesha Begum and Lala Ghulam Sarwar Khan, one of 12 children, on 11 December 1922 at home in the Qissa Khawani Bazaar area of Peshawar, British India. His father was a landlord and fruit merchant who owned orchards in Peshawar and Deolali near Nashik. Mohammad Yusuf Khan was schooled at Barnes School, Deolali, Nashik. He grew up in the same religiously mixed neighbourhood as Raj Kapoor, his childhood friend, and later his colleague in the film industry.

In the latter half of 1940, while still in his teens and after an altercation with his father, Mohammad Yusuf Khan left home for Pune in Maharashtra. With the help of a Parsi café-owner and an elderly Anglo-Indian couple, Kumar met a canteen contractor. Without letting on his family antecedents, he got the job on the merit of his knowledge of good written and spoken English. He set up a sandwich stall at the army club and when the contract ended, he headed home to Bombay, having saved Rs. 5000.

In early 1943, anxious to start a venture to help his father with household finances, he met Dr. Masani at Churchgate Station, who asked him to accompany him to Bombay Talkies, in Malad. There he met actress Devika Rani, owner of Bombay Talkies, who asked him to sign up with the company on a salary of Rs. 1250 per month. He also met actor Ashok Kumar, who influenced his acting style by telling him to act “natural,” as well as film producer Sashadhar Mukherjee. Both of these people became close to Kumar over the years. Initially, Kumar helped out in the story-writing and scripting department because of his proficiency in Urdu language. Devika Rani requested him to change his name to Dilip Kumar, and later cast him in a lead role for Jwar Bhata (1944), which marked Kumar’s entry into the Hindi film industry